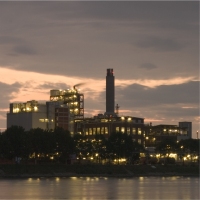 SIGMA plate heat exchangers have been successfully employed for decades in the chemical industry in the most diverse sectors, such as the cooling and heating of base, intermediate and final products, heat recovery or also the tempering of containers, reactors and autoclaves.

The high level of efficiency, low capital outlay, the variability in case of required capacity changes, a high level of operational safety and the possibilities offered for CIP or mechanical cleaning, as well as the utilization of special materials for critical media, have made SIGMA plate heat exchangers an important component in chemical production processes.

Intensive cooperation with worldwide leading companies has allowed API Schmidt-Bretten to mature to a recognized partner within the chemical industry.

Typical tasks for SIGMA plate heat exchanger in the chemical industries are:

In the case of an international group with a works in Duesseldorf, almost 300 SIGMA plate heat exchangers have been installed successfully.
A special application is the condensation of methanol vapor, where T-Series SIGMA plates are used.
These plate types are exceptionally suitable for the condensation of steam due to their large embossing depths between 4.5 and 6.0 mm. The greater flow space, which is up to 80% larger compared to traditional plates, allows the processing of steam with very economical pressure losses. In case of one application, 12,000 kg/h methanol is condensed at 71°C and cooled down to 50°C. The pressure loss on the methanol side is approximately 65 mbar.

Due to the high level of efficiency and the corresponding economic advantages, plate heat exchangers are especially suitable in the manufacture of sulfuric acids with concentrations up to 98%.
Special nickel-based alloys are used as a plate material up to operating temperatures of approximately 95°C ( Hastelloy C 276, Alloy C 276 or 2.4819).
The seals are implemented in Viton GF.
In case of the layout, the flow velocities in the connection nozzles, as well as in the plate gaps, are to be dimensioned so that corrosion is avoided and long service lives are achieved. The correct selection of heat transfer coefficients and surface reserves, as well as an appropriate arrangement of the plates, have contributed to the successful employment of SIGMA plate heat exchangers in many sulfuric acid systems worldwide.